Programmatic advertising consists of automating the process of buying and selling advertising placements. In short, this technique aims to make you more efficient in the management of your paid media campaigns:

2. Are programmatic advertising and RTB (Real Time Bidding) the same?

To simplify, RTB is a real-time auction as its acronym indicates “Real-Time Bidding” and programmatic advertising does indeed offer this option but also other modes of buying such as PMP (Private Market Places). It is a private auction, limiting its bids to a restricted group of agencies or advertisers.

In order to demystify programmatic advertising, we offer our clients an explanation through this diagram that we are making available to you today: 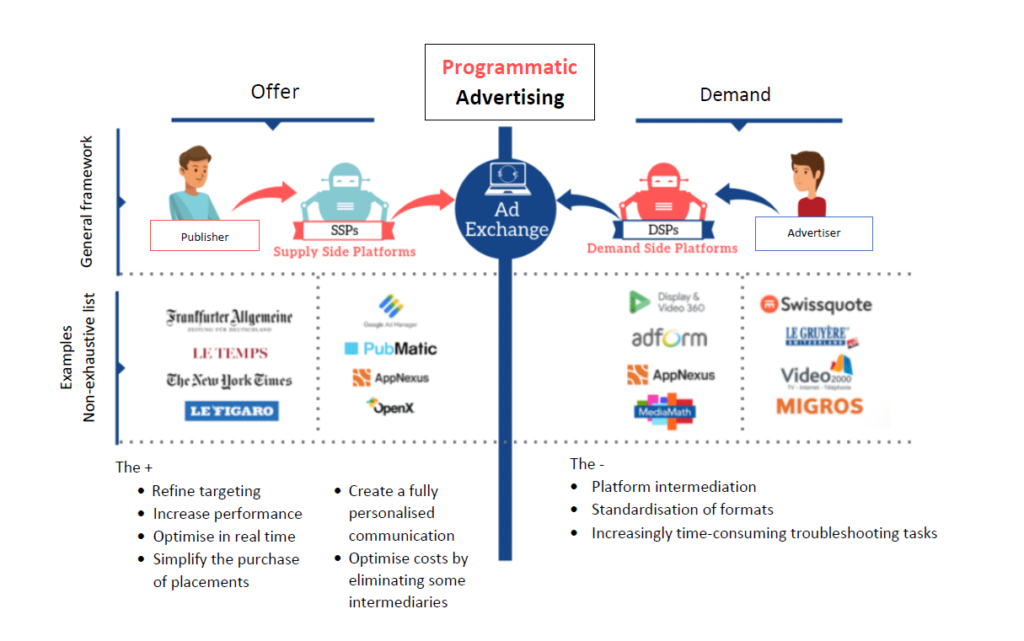 Programmatic advertising is divided into several stages, as shown in this diagram. First of all, advertisers define the parameters of their campaign, i.e. budget, audience, location, and content via programmatic buying platforms, called DSPs.

Publishers can also set their criteria such as price, availability and accepted formats via SSPs.

Finally, DSPs and SSPs communicate in order to conduct multiple auctions in real time and achieve their campaign objectives. The incoming data from each interaction is used and analysed by the programmatic platform and thanks to these analyses, it then optimises the advertisements by selecting only the most effective ones.

You can also listen to this explanatory video by Grégoire Peiron, director of Google marketing platform and Google Analytics on “Think With Google”.

The bottom line is that programmatic buying is set to grow in the coming years, so don’t let this technology and complex jargon impress you. Programmatic advertising allows you to be as close as possible to the consumer and to address them in a personalised way at the right time.

Would you like to know more about programmatic advertising and its possibilities for your company? Make an appointment now with one of our experts for an offer!